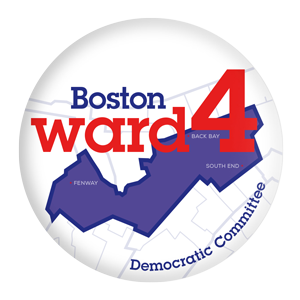 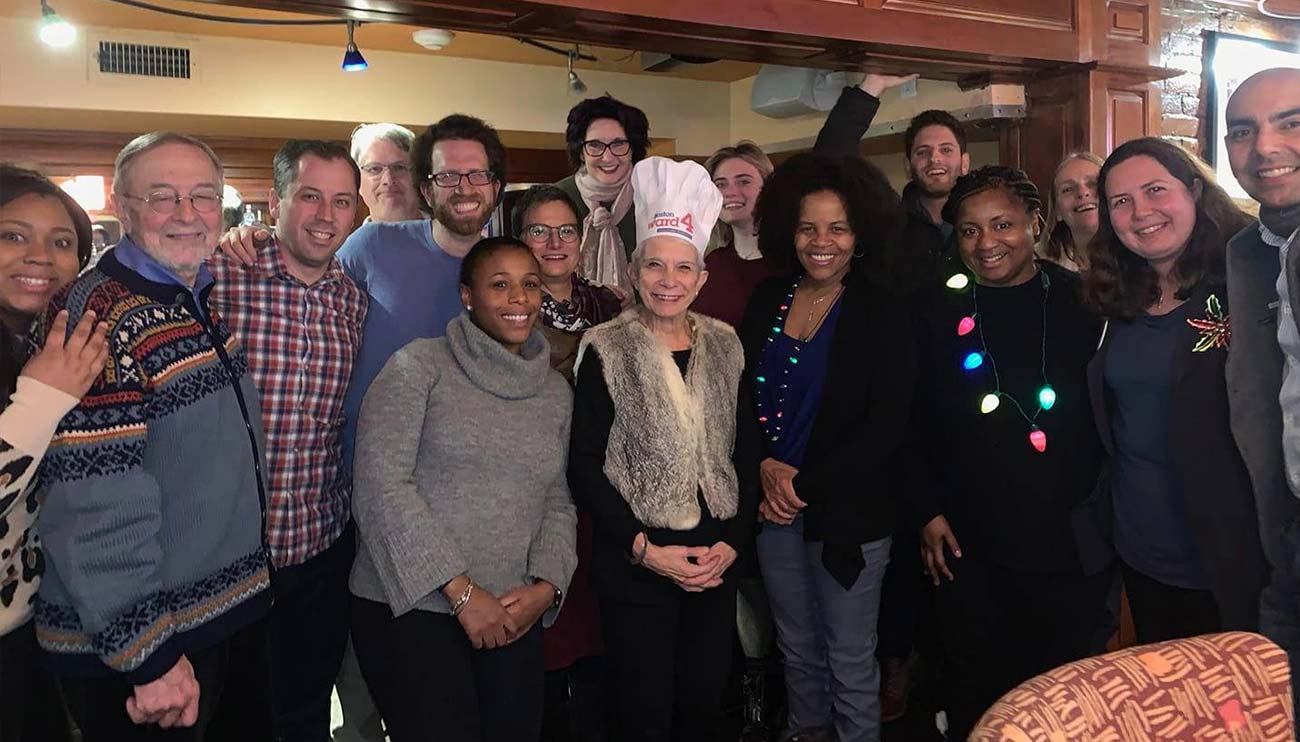 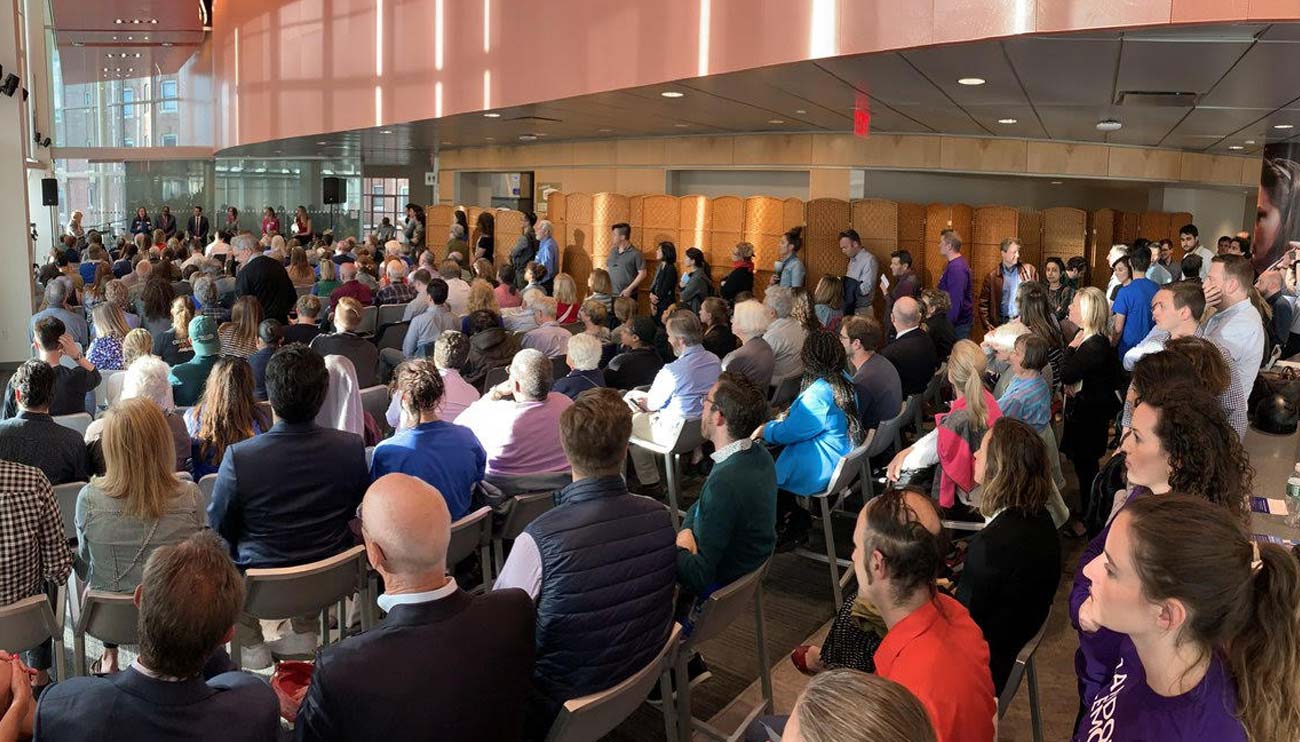 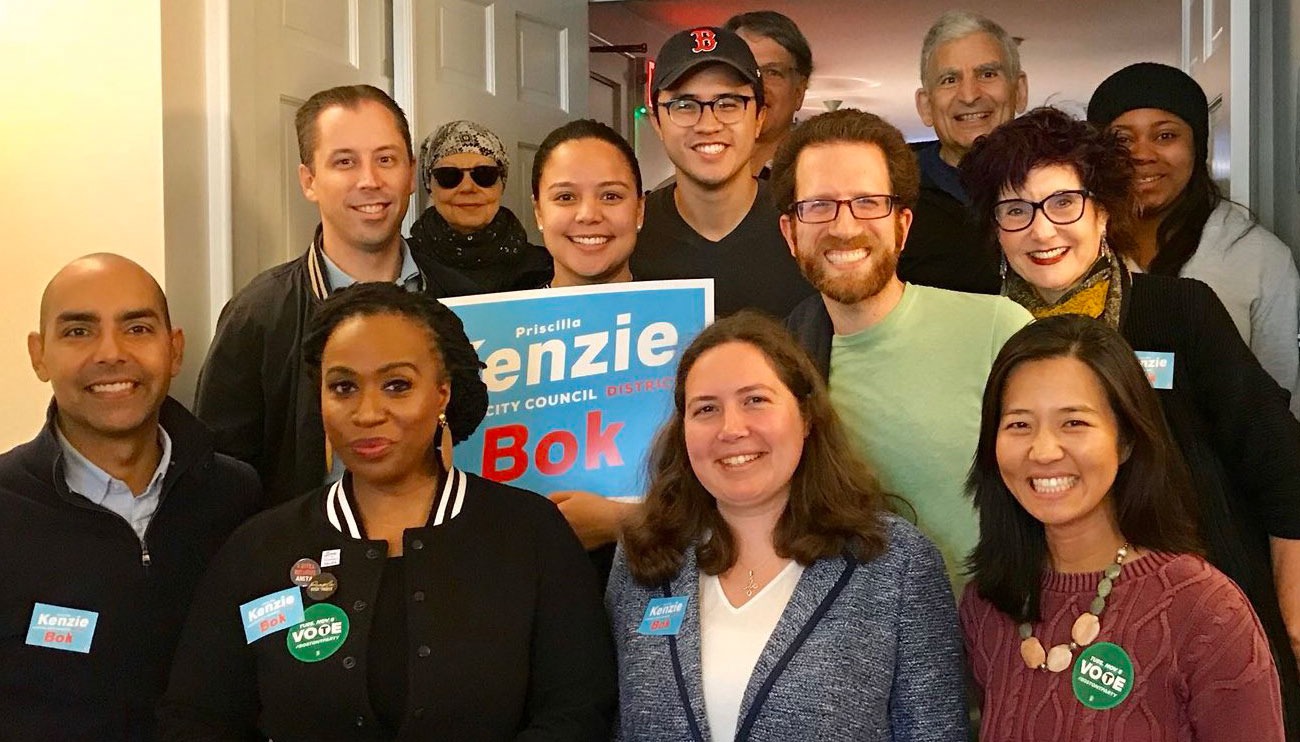 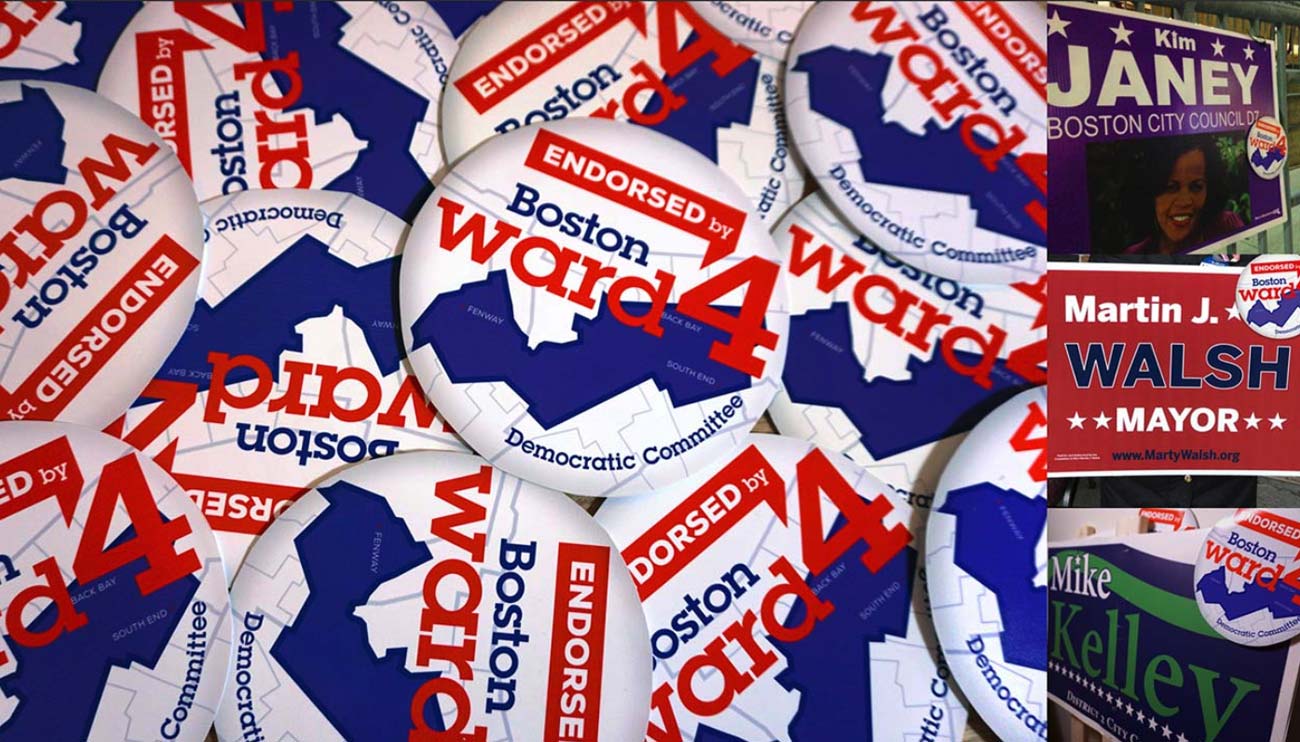 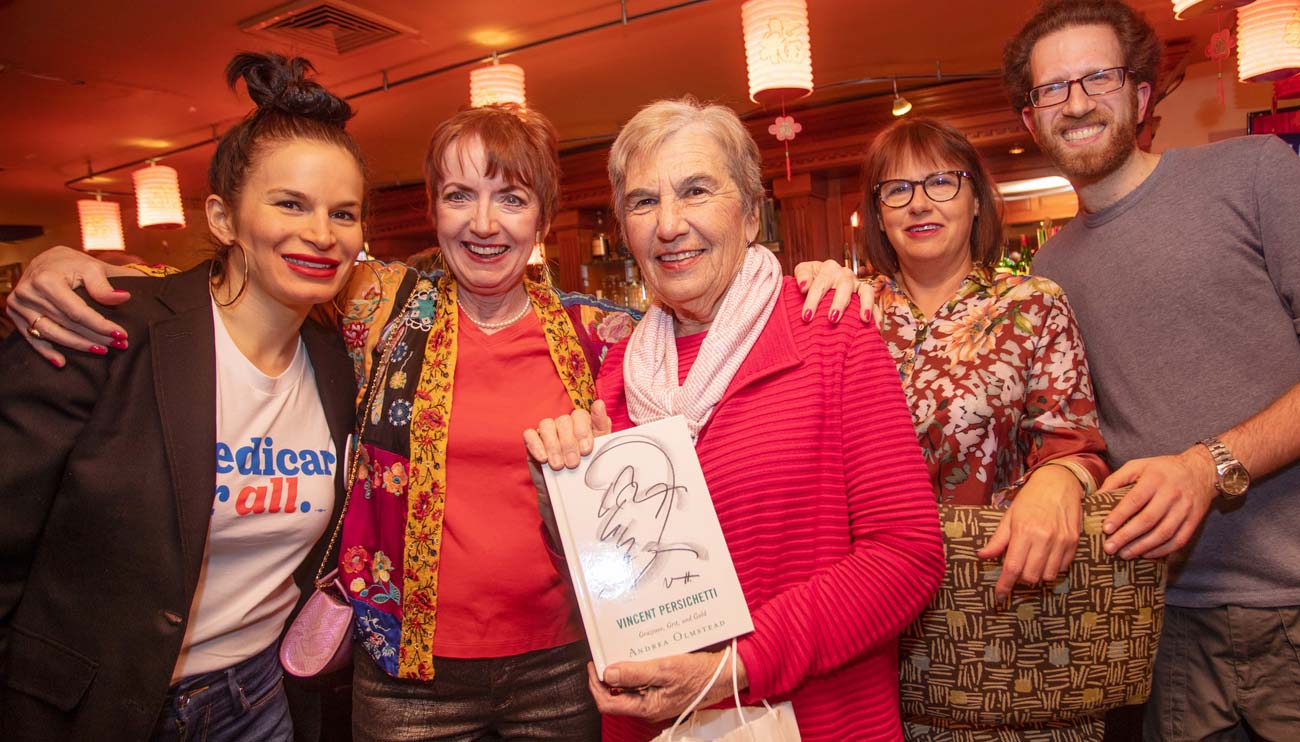 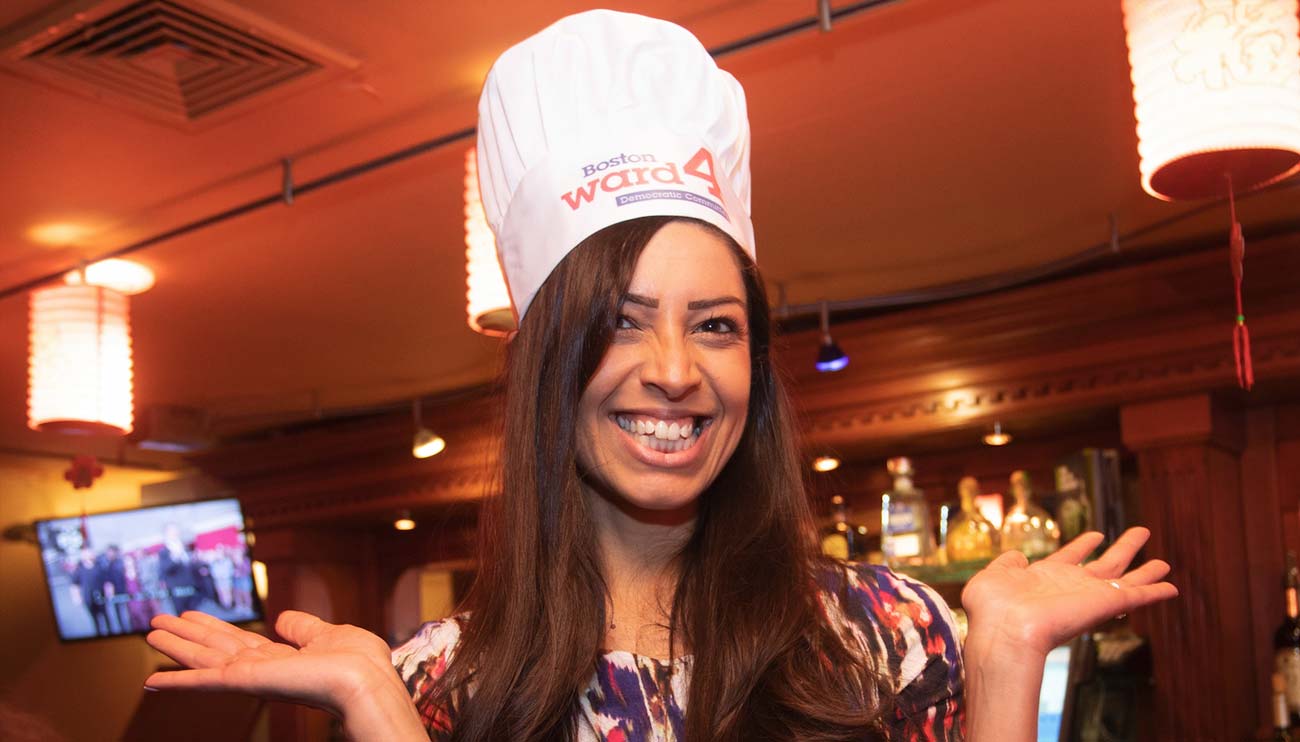 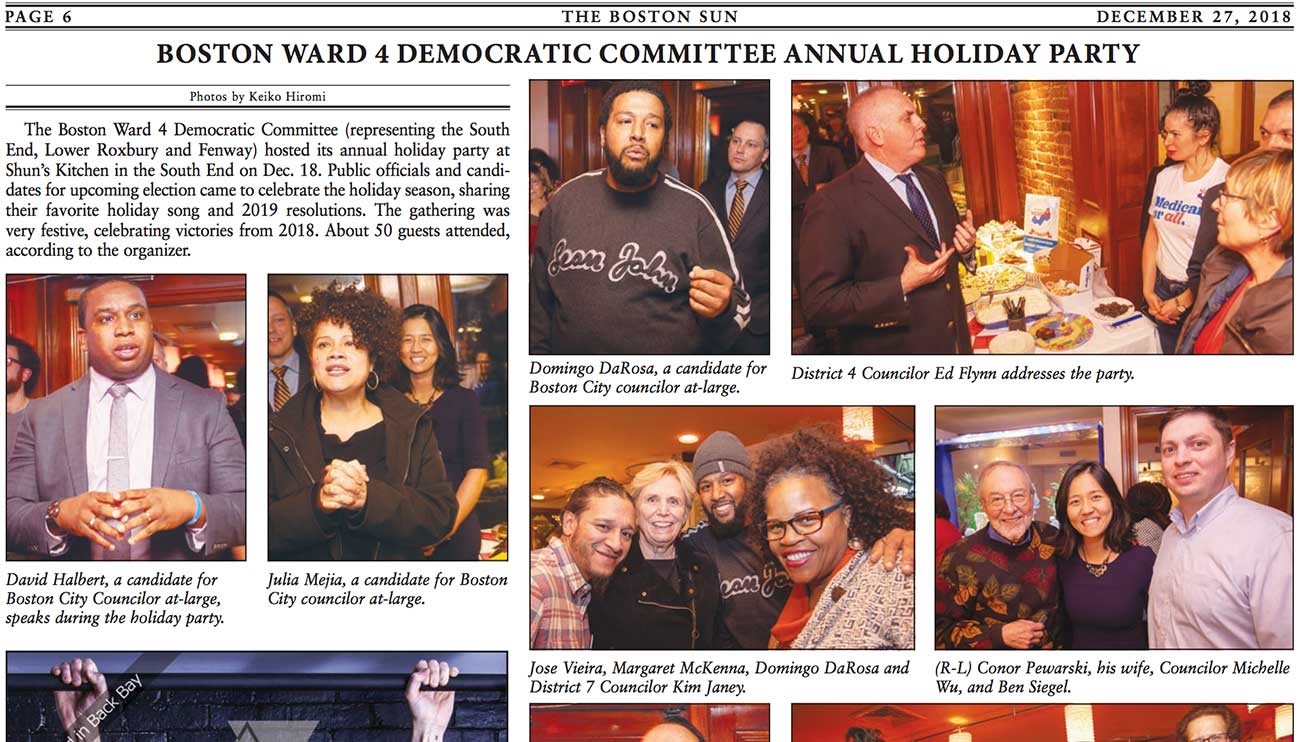 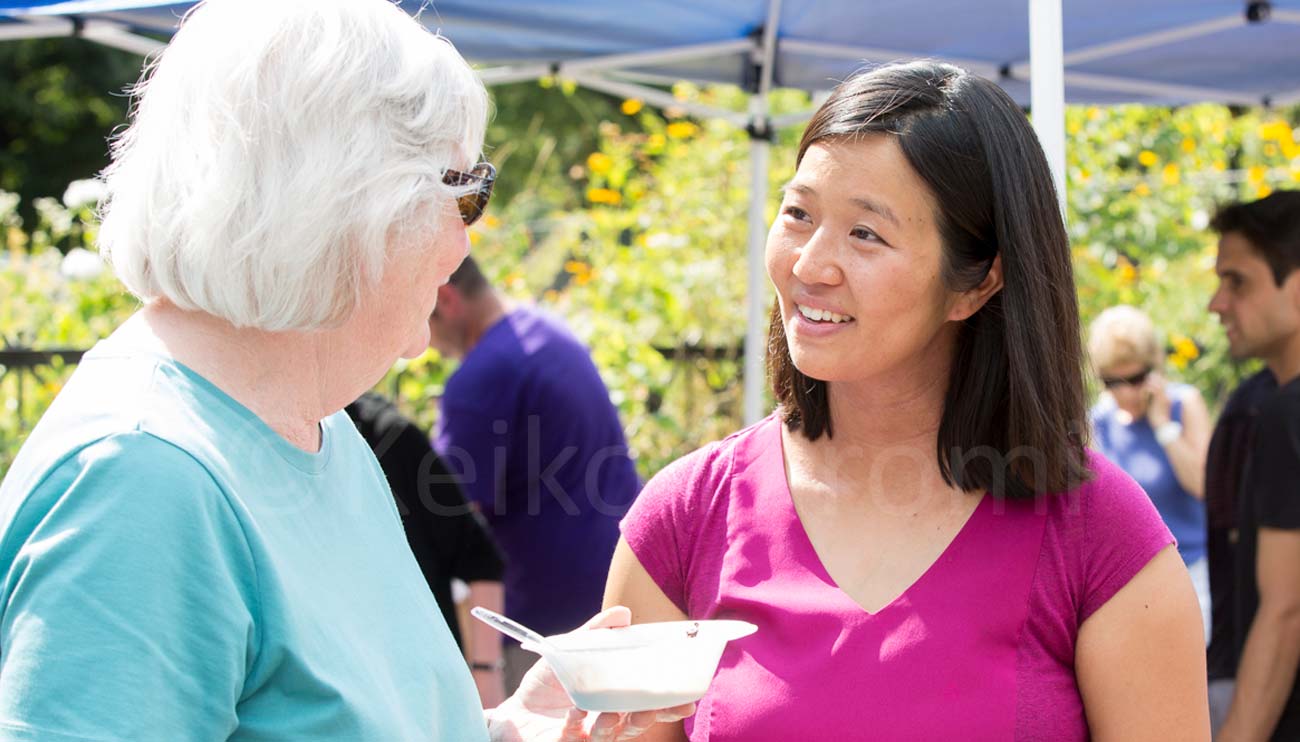 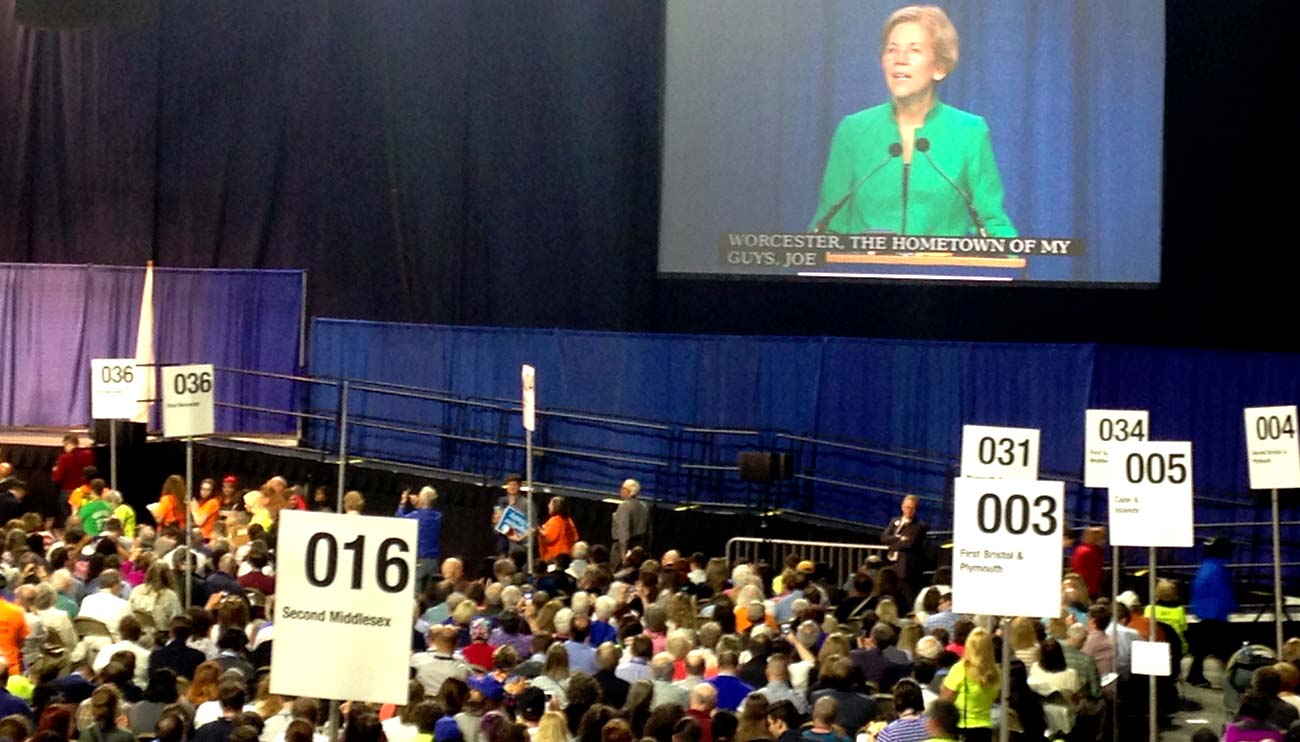 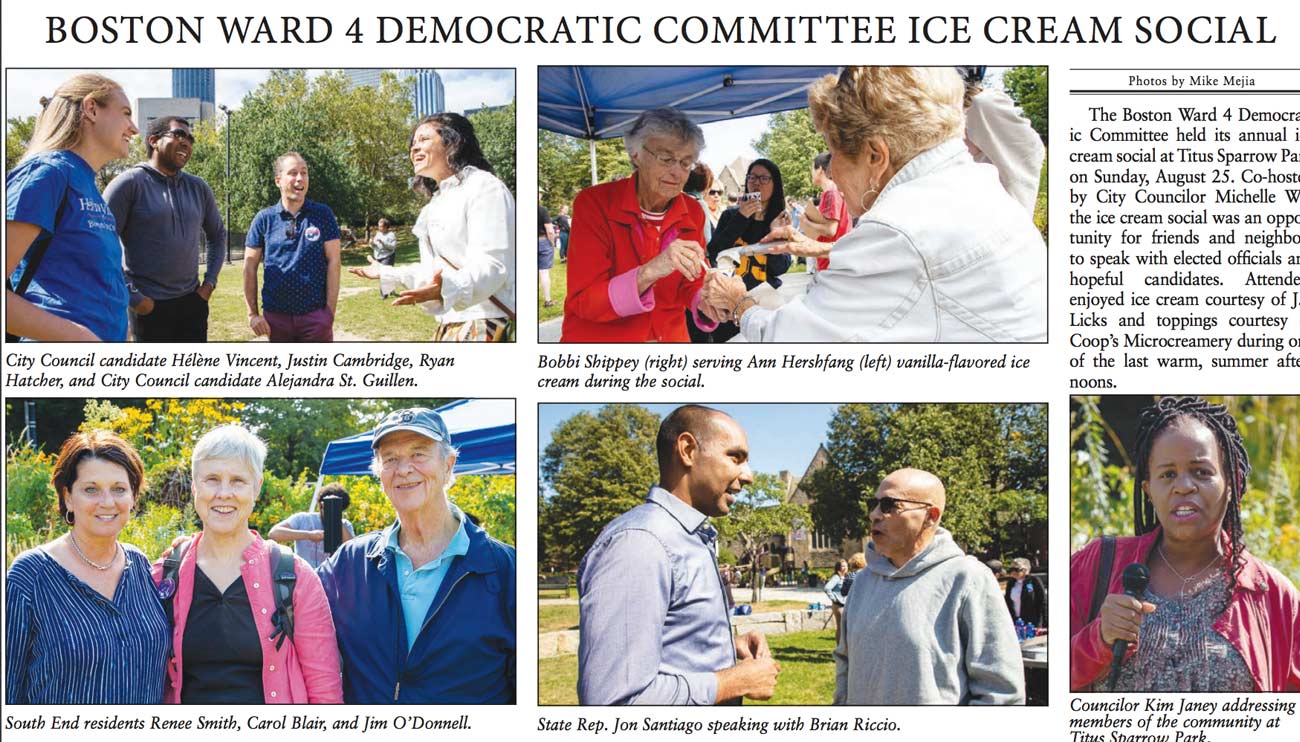 The Boston Ward 4 Democratic Committee conducts the official business of the Massachusetts Democratic Party in Boston’s Ward 4, which includes parts of Back Bay, Fenway, and the South End. We advocate for the election of Democrats at the local, state, and national level and for public policies that are important to the neighborhoods in our ward, the City of Boston, the Commonwealth of Massachusetts, and the nation. Our goal is to reflect the diverse voices of our community through grassroots political engagement.

Our meetings are free and open to the public and take place on the third Tuesday of every month. Everyone is welcome to join to stay informed via discussions with candidates, elected officials, and advocates. Interested in becoming a member? The first step is to attend our monthly meetings.

Our guests will include City Councilor and Mayoral candidate Andrea Campbell and candidate for City Councilor-at-Large David Halbert. More details to follow. See you on Zoom!

WARD 4's WEEKLY PHONE BANK convenes on Sundays at 3 pm. Stay tuned for more candidate and issue outreach in 2021. Weekly details will be emailed to members. 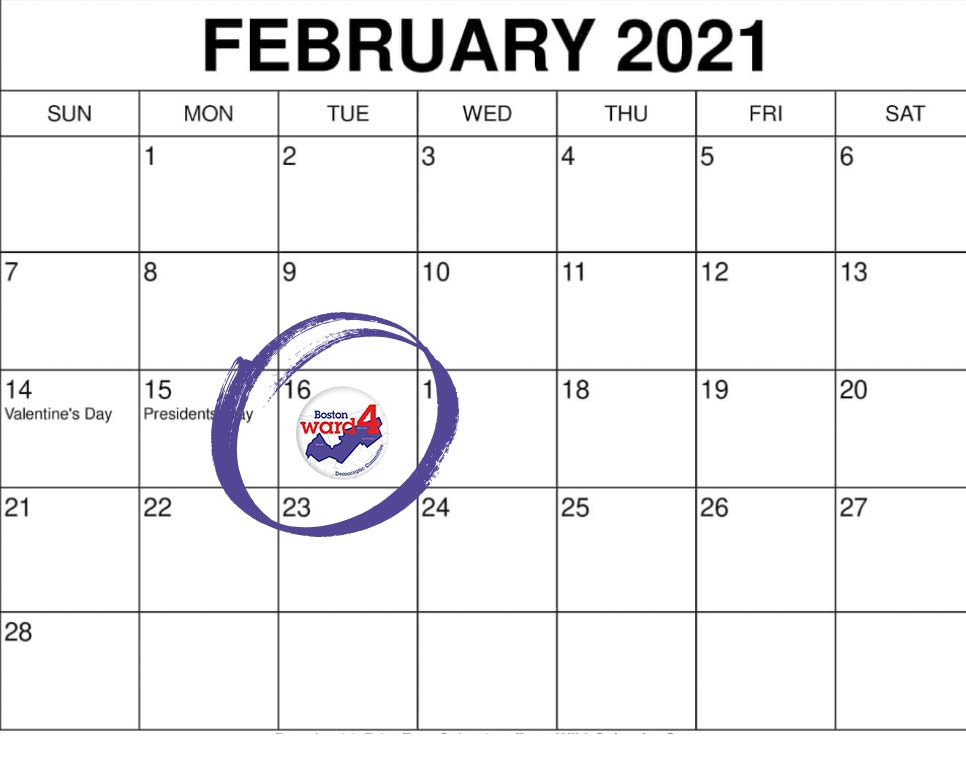 We meet on the third Tuesdays of the month. 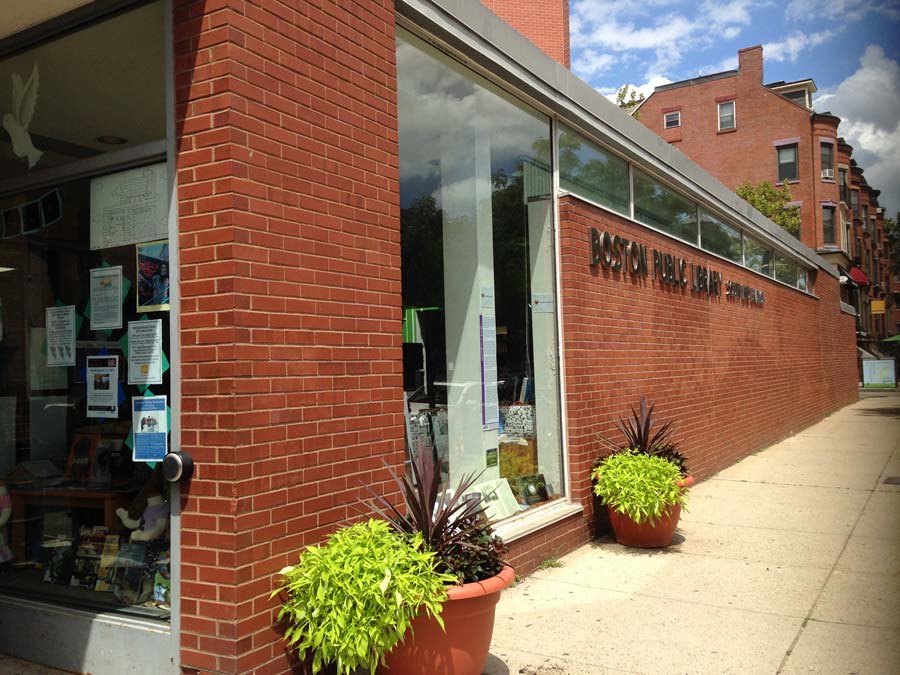 The Deadline to register to vote is any 2021 election or regular town meeting is 10 days prior. Register online, by mail, or in person. 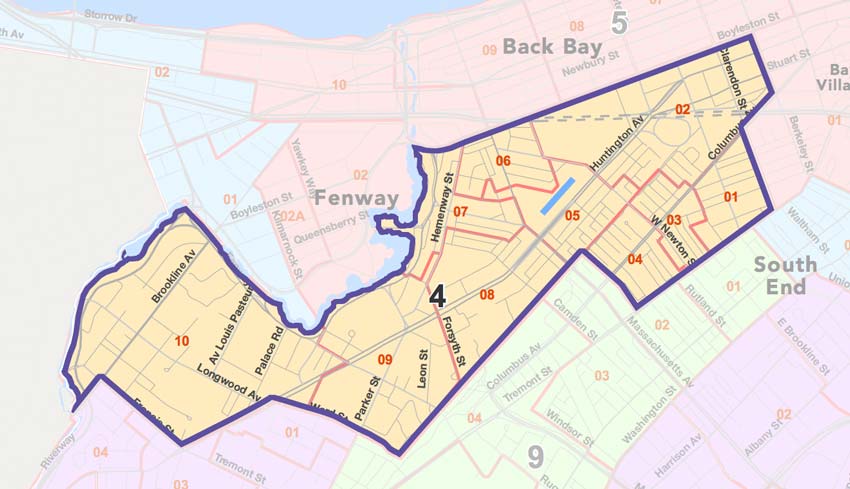 WANT TO GET INVOLVED?

WHEREAS the Trump administration’s mass deportation agenda has had a chilling effect on immigrant communities around the country, threatening the ability of both documented and undocumented immigrants to exist in public space;

WHEREAS state and local law enforcement are not being paid to act as federal immigration agents, and should not be tasked with such work;

WHEREAS basic constitutional rights should be granted to all, regardless of immigration status;

WHEREAS the immigrant population of Boston and Massachusetts contributes to the city and commonwealth’s economic, social, and cultural vitality;

WHEREAS welcoming people of all backgrounds is a core Democratic Party principle;

WHEREAS undocumented immigrants should be able to fully exist in public space as members of the community;

WHEREAS preventing state and local law enforcement from acting as immigration agents, and removing immigration status as a requirement for obtaining a driver’s license, enhance true public safety for all residents of the city and the commonwealth;

WHEREAS the 2017 Massachusetts Democratic Party platform affirms support for “eliminating policies that make local and state officials responsible for the enforcement of national immigration laws” and for “testing and providing drivers licenses to all of-age residents regardless of immigration status”;

WHEREAS it would be a moral stain on our Commonwealth if in the four years of the Trump presidency, our State Legislature passed no laws to protect hte rights of our immigrant community;

NOW, THEREFORE, be it RESOLVED that the Boston Ward 4 Democratic Committee calls on all of its state legislators to support the Safe Communities Act (S.1401/H.3573) and the Work and Family Mobility Act (S.2061/H.3012) and to advocate for their swift passage this legislative session.

WHEREAS, the consensus among the scientific community is clear that global warming is occurring now and that human activity is a dominant driver;

WHEREAS, the Intergovernmental Panel on Climate Change made it clear that the new decade remains humanity’s last real chance to prevent climate chaos;

WHEREAS, the United States and 194 other countries promised to reduce their carbon output “as soon as possible” and to do their best to keep global warming “to well below 2 degrees C” in the 2015 Paris Agreement;

WHEREAS, the Massachusetts Democratic Party’s 2017 platform calls for “aggressive action to prevent and mitigate the effects of climate change and protect our environment” and “in wind, solar, and other renewable energy sources to replace fossil fuels”;

WHEREAS, Massachusetts has not passed comprehensive climate legislation since the 2008 Global Warming Solutions Act, despite the worsening of climate change in the decade since;

WHEREAS, states like New York and California have taken the lead on passing comprehensive climate legislation;

WHEREAS Massachusetts’s US senator Ed Markey has led the call for a Green New Deal that recognizes the urgency of the climate crisis and the economy-wide transformation it demands;

NOW, THEREFORE, be it RESOLVED that the Boston Ward 4 Democratic Committee calls on our state legislators to advocate for bold and comprehensive climate legislation, including—but not limited to—creating a detailed plan for reaching net-zero emissions by 2050, achieving 100% renewable energy by 2045 (and electricity by 2035), putting a tax on carbon emissions to fund green investment across the state, increasing investments in public transportation, and other steps to rapidly decarbonize our economy in a sustainable, equitable, and just fashion.

WHEREAS, on January 22, 1973, in a historic and landmark decision, the U.S. Supreme Court ruled in Roe v. Wade that the U.S. Constitution safeguards a woman's ability to make her own personal medical decisions about when or whether to have children, as grounded in "the Due Process Clause of the Fourteenth Amendment, which protects against state action the right to privacy, including a woman's qualified right to terminate her pregnancy;" and

WHEREAS, this right has been affirmed in subsequent Supreme Court cases such as Planned Parenthood v. Casey (1992) and Whole Woman’s Health v. Hellerstedt (2016); and

WHEREAS, the Trump-Pence administration’s repeated attacks on, and stated desire to restrict access to, abortion and other reproductive health care have given states across the United States a green light to pass unconstitutional barriers to safe and legal abortion; and

WHEREAS, many states including Alabama, Kentucky, Georgia, and Missouri have, in direct conflict with Supreme Court precedent, recently passed laws that ban or restrict access to legal and safe abortions, and similar measures have been proposed in several more states; and

WHEREAS, with the appointment last year of Justice Brett Kavanaugh tipping the U.S. Supreme Court in favor of restricting abortion, these state laws are additionally intended to serve as test cases for the Supreme Court to overturn Roe v. Wade and effectively restrict or eliminate access to legal and safe abortions across the United States; and

WHEREAS reproductive health, including abortion, is a vital component of overall health, and health care is recognized as a fundamental human right; and

WHEREAS, an individual’s freedom to make reproductive decisions is vital to their safety, well-being, economic opportunity, and ability to participate equally in society; and

WHEREAS, The Massachusetts Legislature is currently considering S.1209 and H.3320, also known as the “ROE Act”, which would remove medically unnecessary abortion restrictions and inflammatory language from Massachusetts law, ensure that a pregnant person can access abortion care after 24 weeks of pregnancy in the case of a fatal fetal diagnosis, and improve a young person’s ability to receive trained support and safely access abortion care.

NOW THEREFORE BE IT RESOLVED that the Boston Ward 4 Democratic Committee calls on the state legislators representing Ward 4 in the MA House and MA Senate to support the ROE Act and ensure its swift passage.

WHEREAS, voter turnout in Boston for the 2016 Presidential election was about 66%, and turnout is typically substantially lower in other state and local elections;

WHEREAS, state and city government have the power to enact laws and procedures for elections that surpass existing federal and state voter accessibility standards, that encourage increased voter participation, that create more accountable representation, that uphold voting rights, and that promote greater awareness of our political process through civic education;

WHEREAS, other states have already adopted progressive policies aimed at enhancing voter access and civic participation including, but not limited to, same-day voter registration and early voting for all elections;

WHEREAS, New Hampshire, for example, has adopted same-day registration, which was critical to the success of Democratic candidates in the 216 Presidential and U.S. Senate elections in New Hampshire;

WHEREAS, many other states, meanwhile, have adopted policies aimed at suppressing voter access and civic participation, a trend which is likely to continue while Republicans control most state legislatures and governorships;

WHEREAS, Massachusetts has long been a progressive national leader in areas such as marriage equality, universal health care, and common sense gun control, yet remains behind other states in terms of voter access policy; and

WHEREAS, it is important that Massachusetts serve as a counterweight to the increasingly conservative and cynical political climate in other states and federally.

NOW, THEREFORE, be it RESOLVED that the Boston Ward 4 Democratic Committee: