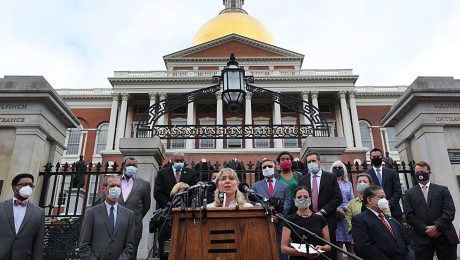 The Ward 4 Democratic Committee sent the following letter to Senators Will Brownsberger and Sonia Chang-Diaz, who serve on the conference committee working on a final bill.

This summer began with a wave of protests in response to the tragic killings of George Floyd and Breonna Taylor by police officers. Since then, new tragedies have emerged across the country, most recently the police assault on Jacob Blake. Each reveals the legacy of systemic racism in this country.

Many politicians are willing to say that they believe that Black Lives Matter. Massachusetts needs to turn words into policies to address the systemic racism in our own backyard

The members of the Boston Ward 4 Democratic Committee are grateful for the work that you did earlier this summer in crafting the Senate’s police accountability bill, named the Reform + Shift + Build Act (S.2820), and have been grateful to see that both of you are now serving on the Conference Committee tasked with developing a consensus bill.

We urge you to stand by the key components of the Senate bill:

Although the Senate bill was, overall, much stronger that the House bill, we urge you to include two key parts of the House bill:

As the Boston Globe editorial board eloquently noted in a recent article, “This moment must not be lost. It’s time to enact real policing reform in Massachusetts, and at least get our own house in order.”

Thank you for your advocacy, and we urge you to continue fighting for a strong and comprehensive final bill.

VOTING! Ward 4 Presents the Who, What, Where & When 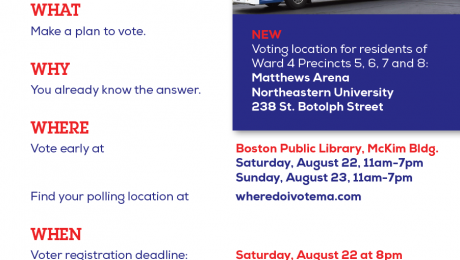 With Primary Election Day coming up, we compiled answers to the basic questions around voting this fall. First, the WHO. Our Committee has jumped on the campaign bus of Senator Ed Markey, actively supporting his campaign with ongoing phone banks. We welcome all volunteers! 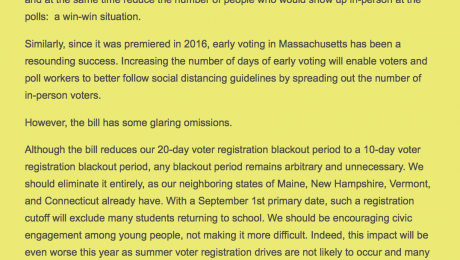 “…we show up every election because of our commitment to democracy. We need to know that we and the voters will be safe,” write Ward 4 Democratic Committee members Andrea Olmstead, Ruth Rothstein, Ben Siegel, Jane Siegel and Grant Young. In an op-ed published in the June 10th issue of The Boston Sun, the writers point to several “glaring omissions” in the election reform legislation recently passed by the Massachusetts House.

Kudos to all for a powerful piece. 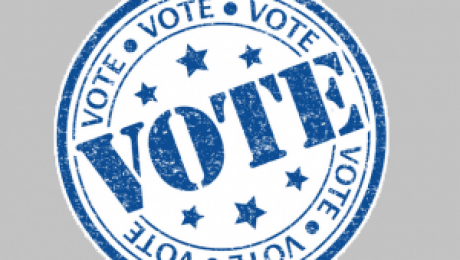 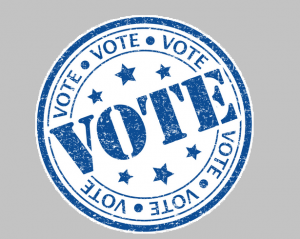 Writing for The Action Network, Ward 4 Chair Jonathan Cohn calls for support of a bill that will protect our September and November elections during pandemic times and beyond. The vote in the Massachusetts House is happening today, June 3rd. Cohn writes, “The bill has some good parts, like making it easier to vote by mail and expanding early voting. But it does not go nearly far enough to protect every eligible voter’s right to participate in our democracy while protecting public health.” However, three critical amendments will address the bill’s shortcomings. Contacting your state rep will help build the support needed to pass the bill and the amendments—and “pandemic-proof” our elections.
https://bit.ly/3ctRcvD 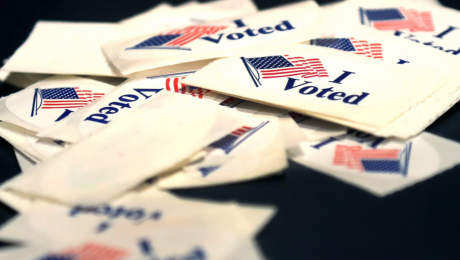 In his latest editorial for The Boston Sun, Ward 4 Chair Jonathan Cohn makes the case for Election Day Registration. This is an opportune moment for reform, given that current election laws are actually designed to prevent transient students and renter populations from voting. Cohn writes that “we have an arbitrary and unnecessary 20-day voter registration cutoff. If you wanted to vote in the primary, you had to have registered by February 12. But those final twenty days before an election are, indeed, when campaigning and media coverage are at their height—and when people are most likely to know an election is even happening.” 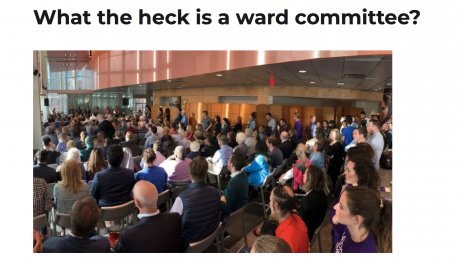 Ward 4 Chair Jonathan Cohn sat down with What’s Up Eastie‘s Kannan Thiruvengadam to take a deep dive into the workings of “clearly the most active ward in Boston.” Here’s a primer on grassroots activism and citizen engagement from a master organizer.

What’s Up Eastie is a Zumix Radio show about East Boston topics. It airs on Zumix Radio on Wednesdays from noon to 1pm. Listen to Zumix Radio on 94.9FM or online at http://zumix.org/listenlive.html

2020 Resolutions for MA Legislature: Action on Climate Change and Immigration 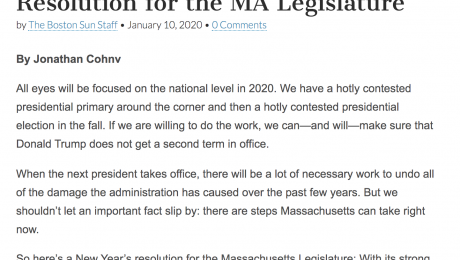 Ward 4, a Legacy of Activism 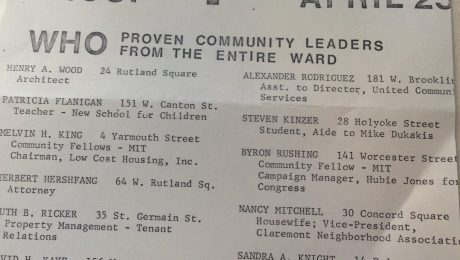 We were delighted to welcome back Herb Hershfang, long-time South End neighborhood organizer, at our September 17th meeting. With letters and newsletters that date back to the late 1960s and the original establishment of Ward 4, Herb provided a historical tour of our Committee’s steadfast commitment to urban equity. In fact, Herb filed suit in the Massachusetts Supreme Judicial Court to make Ward 4 a single-representative district with a voice in the State House. Under his leadership, the Committee successfully helped to defeat the South End Bypass, create affordable housing, and enforce local hiring commitments.

The attached flyer for Ward 4’s endorsed candidate in 1968 reads like a Who’s Who of Boston activist legends. Note the tagline: HOUSING, NOT ROADS!

We salute you, Herb!

Knocking on every door… 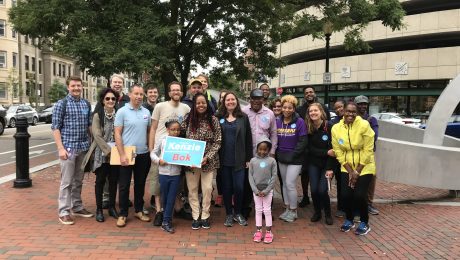 Ward 4 Dems teamed up with our friends from SEIU 32BJ and SEIU 1199 on Saturday, September 7 to support Kenzie Bok for District 8 – Boston City Council and City Councilor Kim Janey—and remind everyone to VOTE! 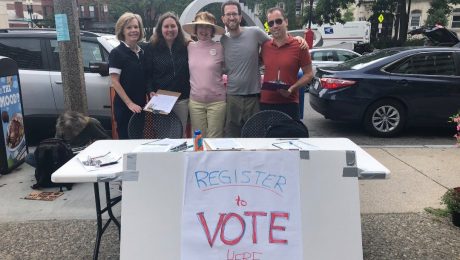 Labor Day Weekend (also known as Move-In Weekend) in Boston is a great opportunity to stage Ward 4’s annual voter registration drive. Thanks to organizer Andrea Olmstead and our awesome volunteers, we collected more than 100 completed voter registration forms (and handed out plenty more) over the three days. With preliminary elections just a few weeks away, the timing couldn’t have been better!